XFiltra™ Could Prevent Microfibre Pollution in Our Oceans

Every time we do a load of washing, tiny fragments, often no thicker than a human hair, break off our clothes, bedding and towels and make their way into the ocean. Once these microfibres are in the environment they are ingested by all kinds of marine creatures.

The Problem: Microfibres from Laundry

This may shock you, but you are probably wearing plastic clothes right now. Don’t believe me? Check your label! Sure, it may not say PLASTIC in big, bold letters but you’ll probably find specific names like polyester, nylon, polyamide or elastane – all of which are made from the same molecules that make plastic.

The big problem comes when these items are washed as tiny pieces of the synthetic fibres break off and go down the drain. As many as 700,000 microfibres can be released from a single load of domestic laundry. Washing clothes that contain these fibres has been identified as the single biggest source (35 per cent) of primary microplastic pollution entering our oceans annually.

This is the equivalent of us all throwing 15 plastic shopping bags into the sea every year.

It's not just plastic fibres that are an issue either, a recent study shows that cotton is the most prevalent microfibre in deep seas. Pollution from cellulose fibres such as cotton and linen made up 80 per cent of all deep-sea microfibres found in new research on Southern European seas.

“The main type of microfibre found in seafloor sediments was thus essentially not plastic but cellulose fibres, that consisted of both dyed natural cellulose (cotton, linen) and manufactured fibres composed of regenerated cellulose, e.g. rayon,” says the paper, The Imprint of Microfibres in Southern European Deep Seas.

This means that commercial settings such as hotels and commercial laundries who wash mostly cotton towels and bedding are (often unknowingly) contributing to the global microfibre problem.

Even though cotton fibres do break down in the environment, they have often been treated with lots of harmful chemicals during manufacture, so these chemicals also make their way into our seas.

Three years ago, our Parent Company, Xeros Technology Group, started looking at this challenge and two years ago, they made a voluntary commitment to the UN, to produce a highly efficient, in-machine solution to microfibre pollution from washing machines.

The product they have developed is XFiltra™, which enables every new washing machine to prevent up to 99% of all microfibres released during a wash cycle.

Inexpensive and easy to incorporate into every washing machine, XFiltra can capture up to 99% of microfibres generated in a load of laundry. It de-waters the filtered material, enabling the easy disposal of the collected fibres into everyday waste.

Both Xeros Technology Group and us as their commercial arm, are in talks with global domestic and commercial manufacturers to get this product in all new washing machines.

We'd also really appreciate your support in highlighting this issue as many people are still not aware that laundry can cause such pollution. Please share this infographic with as many people as you can! Together, we can reduce microfibre pollution in our oceans and rivers. 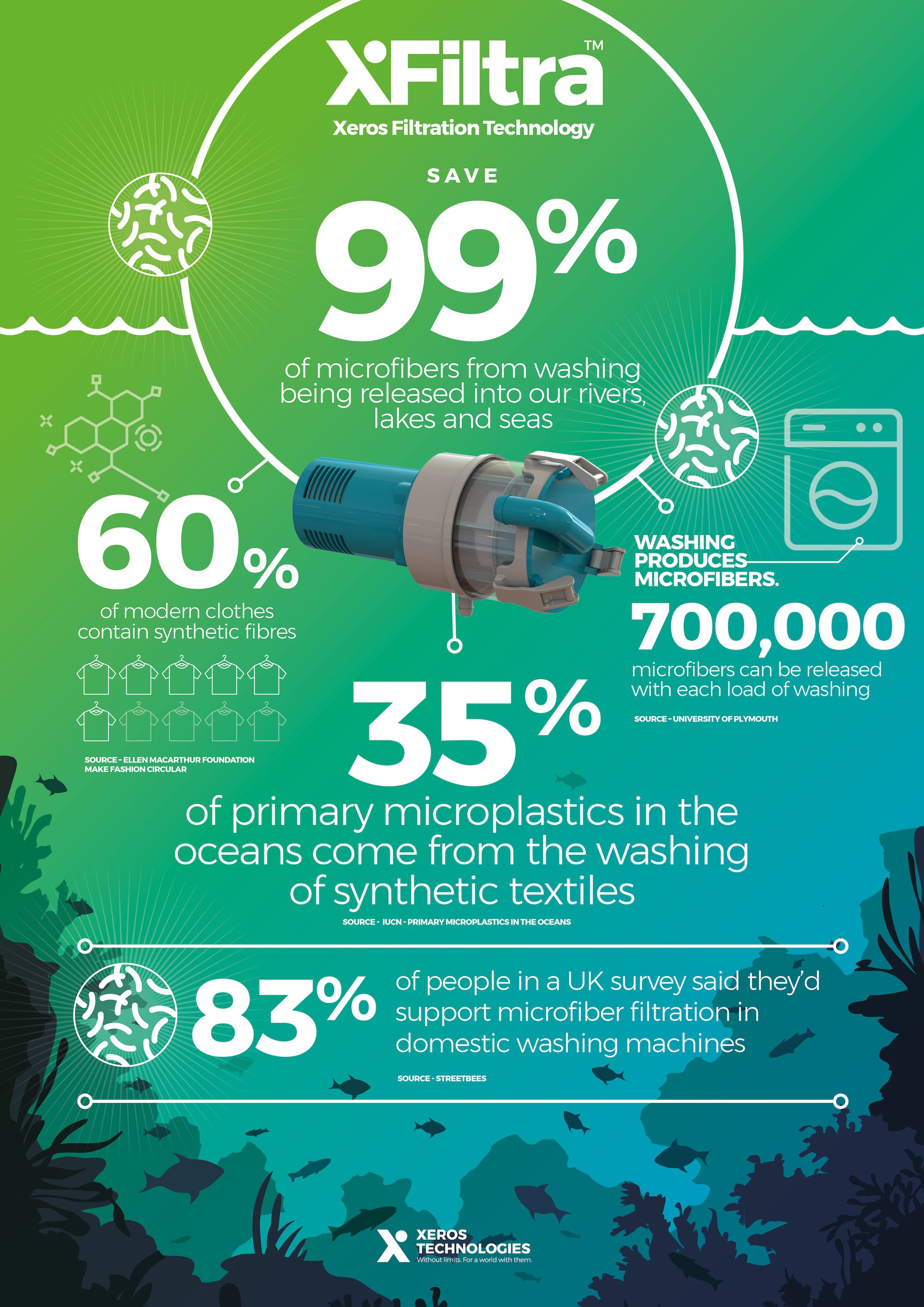 Guest Post: Extending Linen Life
Many launderers would like to know the secret of minimising progressive rotting of cotton fibres and the destructive hydrolysis of ... END_OF_DOCUMENT_TOKEN_TO_BE_REPLACED

Guest Post: How to Halve Your Laundry’s Running Costs
Many years ago, a Scottish hotel, acting on the advice of an external supplier, changed its electric tumble dryers for steam-heated ones. ... END_OF_DOCUMENT_TOKEN_TO_BE_REPLACED