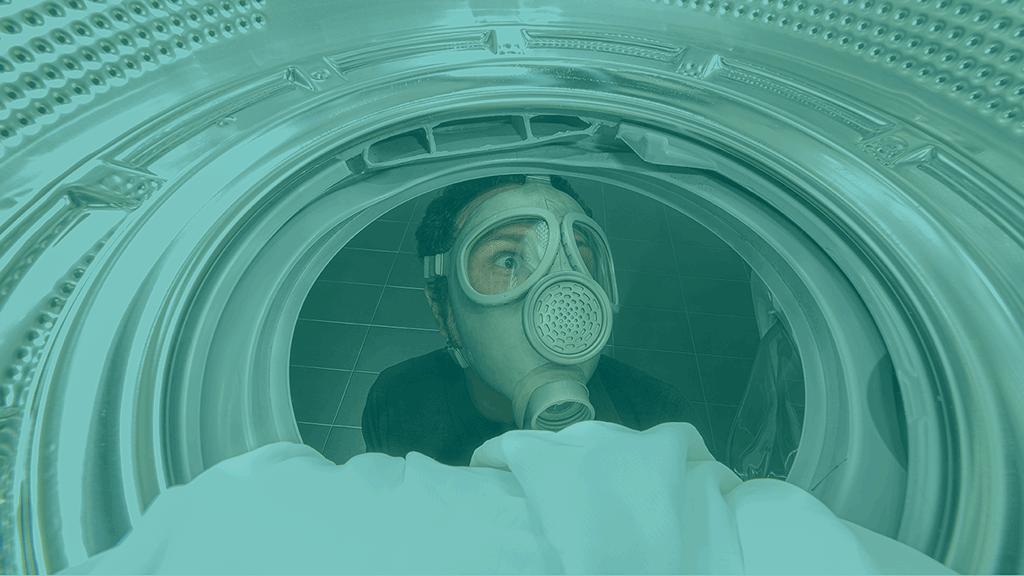 Foul smelling work coming into the laundry is just part of the rich spectrum of visible and invisible contamination on soiled textiles from the wide variety of sources served by the launderer.

It is an entirely different matter if there is a stench on the clean goods being returned to the customer! The launderer would then be open to accusations of poor washing or, even worse, not having washed the goods at all. Every launderer will probably admit, when pressed, to having the occasional complaint concerning smelly goods, but this need never happen if the simple tips for removing odours are heeded. Let’s see what these are...

Tiny particles get up the nose and often give rise to sneezing, but each type of dust has its own smell. This could be soot from a chimney sweep, flour on bakery workwear, road dust on highway maintenance jackets and so on. Despite the many differences between them, the removal technique is common to all.

Fine particles tend to develop a tiny electrochemical charge in the wash, which makes them very attractive to the fabric surface from which they have just been removed! If they are allowed to re-deposit onto the textile surface because of this attraction, they can lock on much more firmly than before they were washed off, giving rise to long term ‘greying’. This also gives the cloth the odour of the particles, because the human nose is very sensitive.

Re-deposition of particles is prevented by the ‘suspending agent’ in the detergent mix. The best suspending agents will neutralise the charge and also physically prevent any contact between the particle and the cloth by wrapping around the individual particles themselves. This ensures that the particles all go to drain with the used wash liquor, with no re-deposition. Greying and residual odours increase sharply with under-dosing of detergent. For workwear which is very heavily contaminated with particles it is occasionally necessary to dose with extra suspending agent.

Chemistry left over from the wash process creates very specific and easily recognisable odours. Unremoved chlorine bleach produces a strong odour of chlorine gas. This can be avoided either by thorough rinsing or by use of an ‘anti-chlor’ – a neutralising chemical which reacts with every trace of residual chlorine.

Excess laundry sour has a sharp, acidic smell. This is best avoided by dosing exactly the correct amount of sour to neutralise the alkali in the raw water, which works well provided rinsing is complete. If sour is being added to economise on rinse water, then the dosage needs to be expertly set up and checked regularly.

Unnecessary excesses of laundry softener often leave a strong fragrance which is unacceptable to some sensitive customers. This can be avoided by keeping the dosage at or below the manufacturer’s recommended level. If softener is being added to soften terry towels, this is often better achieved by appropriate attention to the tumble-drying process.

If neutralisation of the alkali in the main wash is achieved chemically (instead of by rinsing), then extra care is needed with dosage of the neutralising agent. Peracetic acid, for example, can leave a very vinegary smell, even if over-dosed only slightly, leading to complaints of residual odours of fish and chips and the unshakeable belief on the customer’s part that the linen has not been washed at all!

These odours result from inadequate removal of fats, oils and greases (FOGs), usually because of trying to wash heavy-soil goods from spa treatment rooms, food processors or restaurant kitchens, in a light-soil process. There are two techniques for dealing with these.

The vital point to remember when faced with fats, oils and greases is that these need to be removed first time to avoid odours. Any residues not removed in the wash will go rancid with heat and over time become exceptionally difficult to get off. The chemical reactions associated with rancidity tend to produce acid radicals, which rot cotton quickly. This is why some smelly kitchen cloths and many smelly spa towels can go into holes, just with the normal effort of unloading them from a washer-extractor! The worst examples of rancid odours tend to occur when the soiled textiles have been through five or six poor washes, when the stench can become so unbearable that even the most tolerant of customers will complain and take their business elsewhere.

Sewer smells and other foul odours

These smells are usually created by bacterial action on soiled textiles before they are washed or on poorly washed items a few days after washing. Most people are familiar with the odours created by bacterial action on human excrement and urine and with the foul smells from milk, eggs or meat ‘going off’. The common factor is the protein in each of these, so removing the odours and preventing them recurring relies on complete removal of the protein in the soiling. In parallel with this is the need for a good kill on the associated bacteria.

Complete removal of the protein relies on an initial prewash which is long enough (at least 4 minutes) and cool enough (40C maximum) to soften protein from skin sebum on towels and pillowcases and from all types of foodstuff on food industry workwear and restaurant linen. Failure in the laundry to get these simple criteria right lies behind many dank odours in customer storage cupboards. Once the proteins have been softened, they come away easily with detergency and mechanical action at the right temperature in the main wash.

Residual proteins act as nutrient for bacteria and the odours arise from the bacterial excrement which the breeding bugs generate. These frequently do not occur immediately – in one particularly obnoxious example, workwear garments left the laundry odour-free but acquired a very foul stench two or three days later, in the wearers’ lockers. Bacteria from the raw water supply were found to be feeding on the synthetic starch finish on the fabric from which the garments were made. The bacteria were shown to be latching onto the fabric in the rinse and then surviving the tunnel finisher process. Even though they spent 22 minutes at 150C in the finishing tunnel, there were still enough in the damp seams to give rise to a very difficult problem. This was eventually solved by eliminating cattle urine and cattle faeces from the field through which the raw water source (a babbling beck) flowed.

Most bacteria can be killed by implied thermal disinfection in the main wash, by holding the bath temperature at a minimum of 71C for at least three minutes plus mixing time. Modern low-temperature processes achieve this with chemical disinfection and there are a range of systems now available. With the bacteria reduced to a very low level (disinfection does not mean sterilisation), the risk of odours is lowered to an acceptable, non-detectable level. However, disinfection should never be seen as an alternative to good washing; protein removal in the wash is fundamental to odour control.

Managing horrible smells is part and parcel of everyday laundering. By following the tips given here then every type of odour can quickly be brought under control. It is all part of the launderer’s craft skill and it distinguishes the professional from the enthusiastic amateur!

Guest Post: 3 Ideas to Improve the Sustainability of Your Hotel’s Laundry
At last! Environmental sustainability is starting to resonate with a significant number of hotel guests, and leading hoteliers are now ... END_OF_DOCUMENT_TOKEN_TO_BE_REPLACED

Guest Post: Extending Linen Life
Many launderers would like to know the secret of minimising progressive rotting of cotton fibres and the destructive hydrolysis of ... END_OF_DOCUMENT_TOKEN_TO_BE_REPLACED