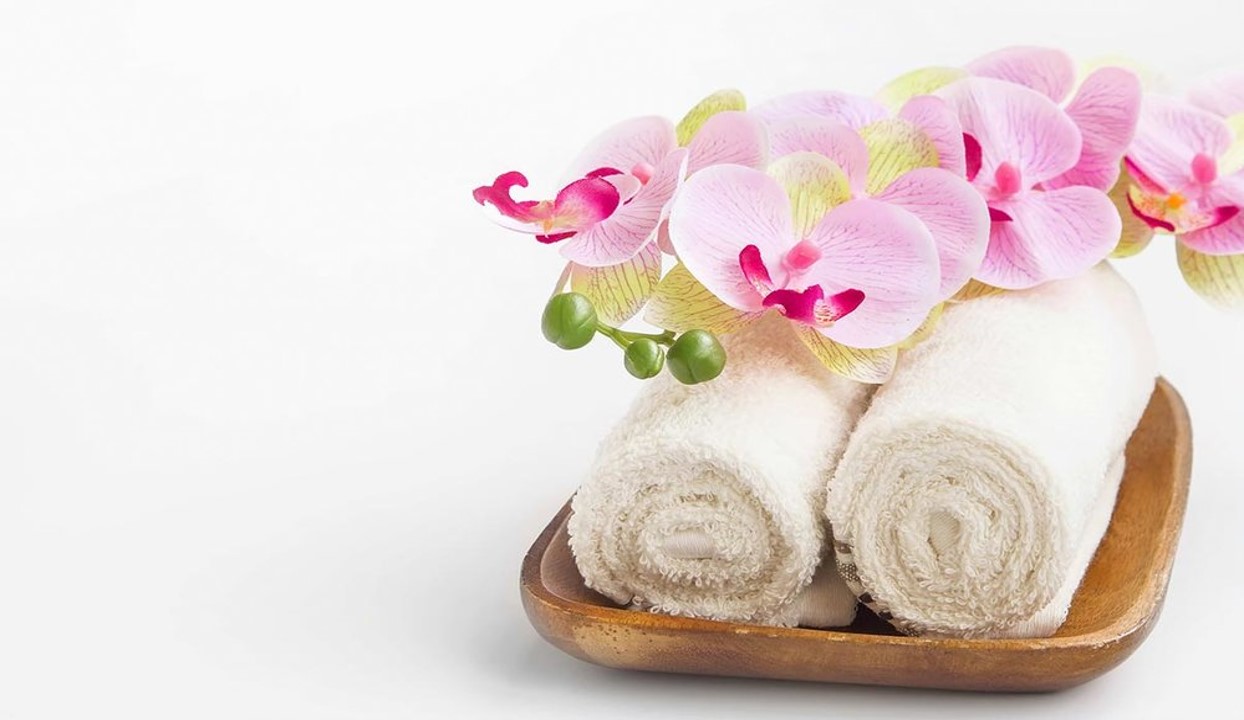 We would like to welcome back our guest blogger, Steve Anderton from LTC Worldwide. This blog will tackle everyone's spa experience nightmare - smelly, oily, yellow towels! Unfortunately, the essential oils used in spas are notoriously difficult to remove and holes in "young" towels and stubborn brown stains are common. This can be a thing of the past with Steve's top tips though. For further information, you can also download our High-Quality Spa Towels document.

Spa towels are notorious amongst professional launderers for the problems they pose and for the risk they carry. These may be summarised as follows:

This month we look at what is causing these problems and how they can be overcome. 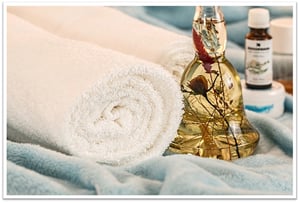 Spa products usually contain highly refined essential oils, such as coconut oil, eucalyptus oil and a wide variety of similar exotic ingredients. These are part of the pampering experience and they give all sorts of pleasant sensations to the person being treated. These oils cling to cotton fibres in the textile and can be quite difficult to remove. If the spa couch is covered with a polyester cotton sheet, the problem is even worse, because the strong oleophilic (oil-loving) characteristic of polyester fibres results in a very strong electro-chemical bond with the essential oils. A standard towel wash process might give a bright, white and odour-free finish to towels from a hotel guest room, but it will often have little effect on spa towels.

The problem can be solved by increasing the detergent dosage very significantly, but at considerable costs for extra chemicals and an extra rinse to get the detergent out again. Some canny launderers will use an emulsifier, which will strip off and solubilise an oil relatively cheaply, without extra detergent, but conventional laundry emulsifiers do not work at all well on spa oils and the problem persists. The secret is to match the emulsifier to the oil. For complete removal, the HLB (hydrophilic-lipophilic balance) ratio of the emulsifier must match that of the spa oil to be removed. Engineers’ oils and greases are generally mineral products and need an HLB value of 12-16. Beeswax needs an HLB value of 9-10. Most spa oils have an HLB value below 9, which is why common emulsifiers designed for engineers’ oils do not work well.

Launderers have been slow to adopt the correct emulsifier for spa oils, which is hardly surprising as they generally do not know which ingredients are on the towels, or what HLB value they have. This is gradually changing, but the problem is not helped by the small number of contaminated spa towels in a typical commercial batch. Even though the emulsifier dosage may be small, it is still an additional cost and most towels do not need much, if any, emulsifier. Classifying spa towels separately is often expensive or not possible.

HydrofinityTM have come up with a neat solution; their washing machine design uses XorbsTM in the cage during the wash. These polymer spheres are designed with a very strong oleophilic attraction which pulls the essential oils off the surface of the textile without needing an emulsifier. It only works on those towels which need it, with no extra chemical cost.

Spa towels which have been washed incorrectly will still carry traces of essential oils and these get heated to high temperature during the tumble-drying process. The breakdown products often smell foul and the stench can lead to justified complaint. The problem improves if the drying temperature is significantly reduced, but this makes for long drying cycles, which is rarely practical for an efficient modern laundry. Rancid odours from degradation of residual fragrances should not be treated as a drying problem; the solution lies in improving the wash process, so that the spa towels can be dried on the normal cycle.

Why do spa towels not last as long as guest room and cloakroom towels?

Spa towels that have been through multiple cycles (of inadequate washing) experience a build-up of rancid essential oils on the cotton pile fibres. As the residual oils get thermally degraded by the heat of the drying air-stream, there is a build-up of the chemical breakdown products on the textile. These unwanted chemicals not only smell foul, they tend to be acidic and like all acids they attack the cotton fibres and make them prematurely weak. This is why older spa towels that have been poorly washed not only look greyer or yellower; they will rupture easily, sometimes just with the effort needed to pull them out of the washing machine. It is unfair to blame the laundry operative for being too rough – simple testing of the damaged area will reveal the localised weakness. There is also no justified claim on the supplier of the towels, demanding replacements. The problem lies with the inadequate laundering.

Why might spa towels be linked to increased laundry fire risk?

There is increasing evidence to link most laundry fires to spontaneous combustion. The conditions for this are believed to be linked to incomplete removal of oily residues from textiles. The problem is initiated in the tumble dryer, when the residual oils are heated up and eventually either the oils themselves or their breakdown products start to react with the oxygen in the drying air. These chemical reactions tend to be exothermic – that is they generate heat. The local increase in temperature causes the chemical reactions to go even faster and generate even more heat. When the autoignition temperature of the textile/chemical mixture is reached, combustion occurs spontaneously and hurls flaming textile in every direction.

Sometimes ignition occurs in the dryer itself and damage is limited. Many hundreds of dryer fires are reported to the Home Office every year. However, if the reactions start only slowly in the dryer, they can continue in the warm pile of finished, clean goods. Under the right conditions, ignition does not finally occur until several hours later, when the premises are unattended overnight for example, leading to total loss of a business and premises. Laundry Technology Centre has investigated fires which have resulted in total loss of laundry premises, restaurant premises and even on one occasion a vehicle that had been packed in the evening at the laundry, for early morning delivery. On one occasion a hotel spa experienced a fire in its laundry room in the middle of the night and asked a local commercial laundry to wash its towels whilst it refitted with new equipment and stock. The local laundry processed the towels and itself suffered a similar fire overnight (involving the same spa towels), which resulted in widespread damage to both equipment and premises!

Any problems in improving oil removal in the wash should be seen as minor and well worthwhile in comparison to the severe cost and disruption of a laundry fire. No business owner wants to be woken at five in the morning with the news that their company premises are burning down! High volumes of oily work can be addressed with modern emulsifier technology. Low volumes can be rendered safe using properly equipped machines, such as the HydrofinityTM fitted with the XorbsTM .

Indelible yellow marks that appear in the wash

High quality spa products tend to have a disinfectant incorporated in them and all too often this is based on chlorhexidine. This popular ingredient is widely used in the UK NHS and in retail skin treatments such as Savlon ointment. Chlorhexidine is often not completely removed in the wash, but this does not matter too much because it is beneficial rather than harmful to the user. However, if the laundry process uses sodium hypochlorite (chlorine bleach) for the removal of vegetable dye stains from tea, coffee and red wine, for example, then there is a real risk of this reacting with traces of residual chlorhexidine to form an indelible yellow dye. This colours cotton and produces a localised, irremovable yellow stain where nothing could be seen before and is an infuriating cause of complaint. The severity of the yellow staining depends on the concentration of chlorhexidine in the original spa product. If the chlorhexidine remains closely associated with the spa oil, then complete removal of this will minimise the problem (in the HydrofinityTM machine for example). Otherwise the only solution is to change the bleach for the spa towel process to hydrogen peroxide, which should solve the problem but at greater cost.

Spa towels are generally a low volume classification, except of course in on-premise spa laundry rooms, but the damage they can cause is disproportionate. Modern marketing often uses, as a sales tool, the ability of a good laundry to deal successfully with spa towels, because they are commonly the Achilles heel of a commercial laundry service. Being able to handle these can make all the difference between winning and losing the battle for a prestige laundry contract with a successful five-star hotel, for example. Good luck!

Guest Post: Six Ways to Improve Your Hotel's Laundry Efficiency
The often-recommended way of raising a hotel laundry’s productivity at minimum cost is to set realistic targets and achieve these ... END_OF_DOCUMENT_TOKEN_TO_BE_REPLACED

World Environment Day: How to Lighten the Load on the Planet
Laundry and pollution may seem unconnected but increasing plastic pollution in our oceans is partly down to using our washing machines. ... END_OF_DOCUMENT_TOKEN_TO_BE_REPLACED